I have moved again!

Maybe I should just move back here?

But for now, Posterous folded and my stuff was transferred to wordpress.

I received an email this past week from Triathlon magazine that included a free digital issue of Competitor magazine. Maybe you can by just clicking on this link too? Anyway, I liked the magazine, but I question if I need yet another subscription when I have too many as it is.

But that's not my point!

In this free issue, the editor, TJ Murphy made this statement about why he does marathons. "It was really about how I'd lost the butterflies I had felt before games and track meets in high school. I was in my mid-20's and sliding into the routine of work and weekends, and I began to notice how a layer of boredom had descended over my life like a warm fog. Days and weeks would pass like flat white noise, everything turning into a blur. When I signed up for my first marathon, I felt like I was planning an escape from a low security prison".

Despite the differences, which are many, I really connected with this thought. I did not run track or cross country in high school. In fact I was rather ummm, non- active. And it wasn't until I was turning 40 and had lost the little bit of fitness I had from playing rugby and lifting weights that I decided to do something about the routine of work and weekends. And heck, I even worked most weekends, being a RN and all.

Also, a layer of boredom seems harsh. I wouldn't want my family, friends or anybody think that it is something to take personally. I certainly wasn't bored with anybody. Why running or triathlon or specifically marathons to solve this boredom problem? Maybe it should have been something more along the lines of serving others in our society in some capacity? Volunteering!

Yet, looking back, "a layer of boredom"  also describes accurately a huge problem I had in my life. Life was passing fast, I could believe how fast a season or a year went by. It felt like my life was flashing before my very eyes without a real traumatic event to cause it.

But I had to run! I had signed up for the Lifetime Fitness Triathlon in Minneapolis.

I had no idea at the time how much it would change my life. How much better I would feel and that I was escaping a life that would "pass like flat white noise, everything turning into a blur". Now when I reflect on a year or a season, it feels right. Yep, that felt like 3 months or 6 months or 1 year. I am enjoying my wife more, my kids more, my faith more.

And I feel that I have the capacity to fit other things in my life as well. Like serving others, volunteering as I mentioned earlier. I don't in what capacity yet? Maybe not even til my 3 kids are older. But whether it's tomorrow or 5 years from now, I know that I'll have the physical and mental energy and strength to do whatever, because of running and triathlon.

The Lucky 7k was not so lucky for me.

Or maybe it depends on how you look at it?

I ran it @ 90 seconds slower than last year. In of itself, that sucks... but it didn't bother me anyway. I ran hard, it felt good to run hard and I knew that my lungs were restricting me from my potential. My legs wanted to go faster.

I can't believe how many times that I just wanted to stop. Anytime I had that thought my legs would seem to carry me a little faster. Well, for a minute or so. But no matter how much I wanted to stop, I didn't seem to get worse as the run continued. My heart rate would seem to confirm this as it was 175, 175, 179 and 177 for the last 3+ miles.

At around the 6k mark, I heard as I was passing between 2 guys, "he needs an inhaler!" or something like that. Hilarious!!!! I did sound asthmatic.

The lucky part was that I finally got in a hard tempo run. My first in over 2 weeks because of this sinus infection from hell. I'll take it. My only "complaint" is that I don't have a very good measure of my fitness for the Cemstone Run for Others 10k in about a month. Would I have been able to do this a minute per mile faster if I hadn't just had my first night of no drugs in 2 weeks? Not a clue! 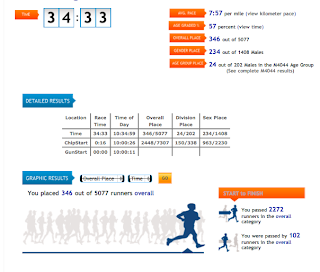 As you can see there are many "new" runners because with a slightly better than 8 minute pace, I still placed in the top 7% overall
Posted by Jumper 2.0 at 8:09 PM 2 comments:

Well, Am I going to blog or not?

Things have been tight in the Jumper household for the last couple of years. Which is one reason my blogging has really slowed down compared to prior to that. And it was 2 years ago when my 5 year old computer went dead as in motherboard, not a hard drive or something like that. Well finally I have 27 inches of iMac goodness to use again and so I expect that gradually you will see an increase in blog activity. I still read a lot of blogs but often don't comment since I was reading it on my iPhone.

So, I have been really sick. It has to be just a cold since I had no fever. Regardless, coughing fit, the congestion won't stop no matter what I take nastiness. I couldn't sleep because of the coughing. Finally I figured out the right combination of cold medicines like mucinex dm and benadryl at night to sleep a good 6 hours. Never mind the fact that I'm somebody that needs at least 7. Oh, and I am going to be a loyal neti pot user for now on. Call me weird if you like but it's proven to be effective.

It's slowly getting better. So yesterday I ran. If you know me on facebook you may have read that I'm a loyal celebrant of Pi day so I ran 3.14 easy miles. Perfect for my first run in 2 weeks. Ran it with my son and he was nice enough not to comment about my breathing. My heart rate was 159 for an average, which would be 7-10 beats faster than normal.

Today, the run went better except that it was on the treadmill. It's beautiful and sunny now, but 2 hours ago it was pouring rain. And although rain is rarely a deterrent for me I thought better of it because of still getting over the plague.

The next two days will be recovery runs then I have the Team Ortho Get Lucky 7k on Saturday morning. Last year I ran it at a 7:34 pace. I think I can still match or beat that despite, well, never mind. I am a little concerned that I'll tire out after a few miles though? We'll see I guess.

At the latest I'll post about the results on Saturday.

Good Running everybody!
Posted by Jumper 2.0 at 3:05 PM No comments:

Far better it is to dare mighty things, to win glorious triumphs even though checkered by failure, than to rank with those poor spirits who neither enjoy nor suffer much because they live in the gray twilight that knows neither victory nor defeat.
--Theodore Roosevelt, 26th U.S. President